On the 10 June 2020, Swedish chief prosecutor Krister Peterson named a deceased person as the main suspect for the murder of Olof Palme in 1986 and announced that the official investigation will be closed. Many have been critical agaist this, for example the journalist Nils Funcke (this link and all further links in this post are to content in Swedish). 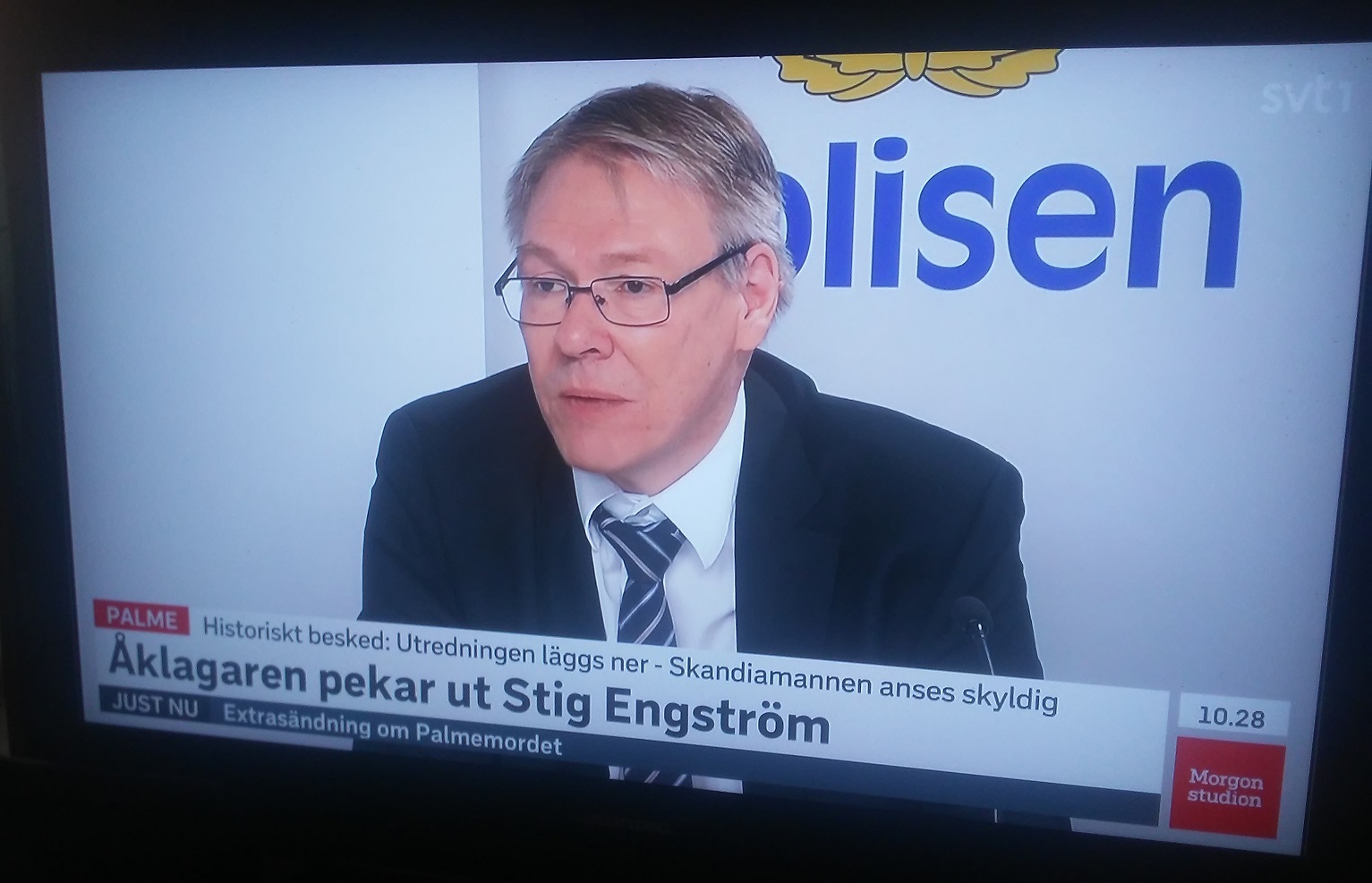 Another who is critical is Ingvar Widell, who went to Stockholm after the murder took place. He is now a board member of Accoun and was interviewed on the 27 July 2020. In the interview he explains about his experience the night of the murder, including the lack of action from the police and misleading information about this. Below, you can listen to the interview in Swedish (29 minutes long, or download the 13 MB mp3 file).

He thinks some from the police and military can have been involved in the murder, which is an opinion that is held also by others (for example, see what we at Accoun have written about Palme before).

The investigation is said to be Sweden’s costliest police investigation ever, estimated to about 600 million SEK. An interesting question is what was done with this money? During the beginning of the investigation, some of it was spent on very expensive bodyguards to protect Hans Holmér, who was then the chief of the special Palme investigation unit. Also, one of the bodyguards spent over a million SEK of taxpayers money to buy special equipment, such as submachine-guns, for the bodyguards. All the equipment the bodyguard purchased from one company, Strateg Protector AB, which was operated by a former policeman, suspected of being involved in the murder, and a former military. Thus, the Swedish police may even have spent some of the money to pay (the company of) someone involved in the murder. One of Holmér’s bodyguards has later been accused to have commited another murder.

There is also information that Palme called for his Säpo bodyguards on the evening of the murder, but couldn’t reach them, so despite known threat against Palme no bodyguard was protecting him or his wife when he was shot dead and she was lightly wounded.

Army and Navy channels banned viewers from their live streams when they asked about war crimes, according to an article in The New York Times.

Read on BBC about the Thai pro-democracy activist who a became victim of enforced disappearance. Regardless, Thailand enjoys the support of many western democracies, which sometimes even contribute to the list of abuses there. For example, CIA operated a “black site” prison in Thailand where detainees were subject to torture. We have also noticed that Sweden tried to downplay problems with human rights in Thailand when selling them a warplane (link to content in Swedish).

From many countries around the world, we have unfortunately heard about many examples of how measures against the new coronavirus violate human rights or are used as an excuse for more or less dictatorial powers. Two discouraging examples, of many, are Bolivia and Russia.

Also the UN has addressed these issues and UN News reports that “police and other security forces are using excessive and sometimes deadly force to enforce lockdowns and curfews”.

At Accoun we have been critical against the decline in respect for human rights in Sweden, but we are glad that Sweden’s handling of the coronavirus has not included repressive measures and should in that respect serve as a good example.

Have you heard about censorship on social media and thought that it doesn’t happen to me? Well, you can try to publish a link to this website, accoun.org, on Facebook. Then see for yourself. We first noticed the problem on the 12 June 2020. Also older posts/comments including links to accoun.org seem to have been removed from Facebook. Despite that we tried to protest against this censorship, the situation is still the same, as shown by the screendump below. If you would find that Facebook’s ban of accoun.org has ended, please contact us so we know. To circumvent the censorship, writing accoun org (without dot) seems to still work on Facebook. 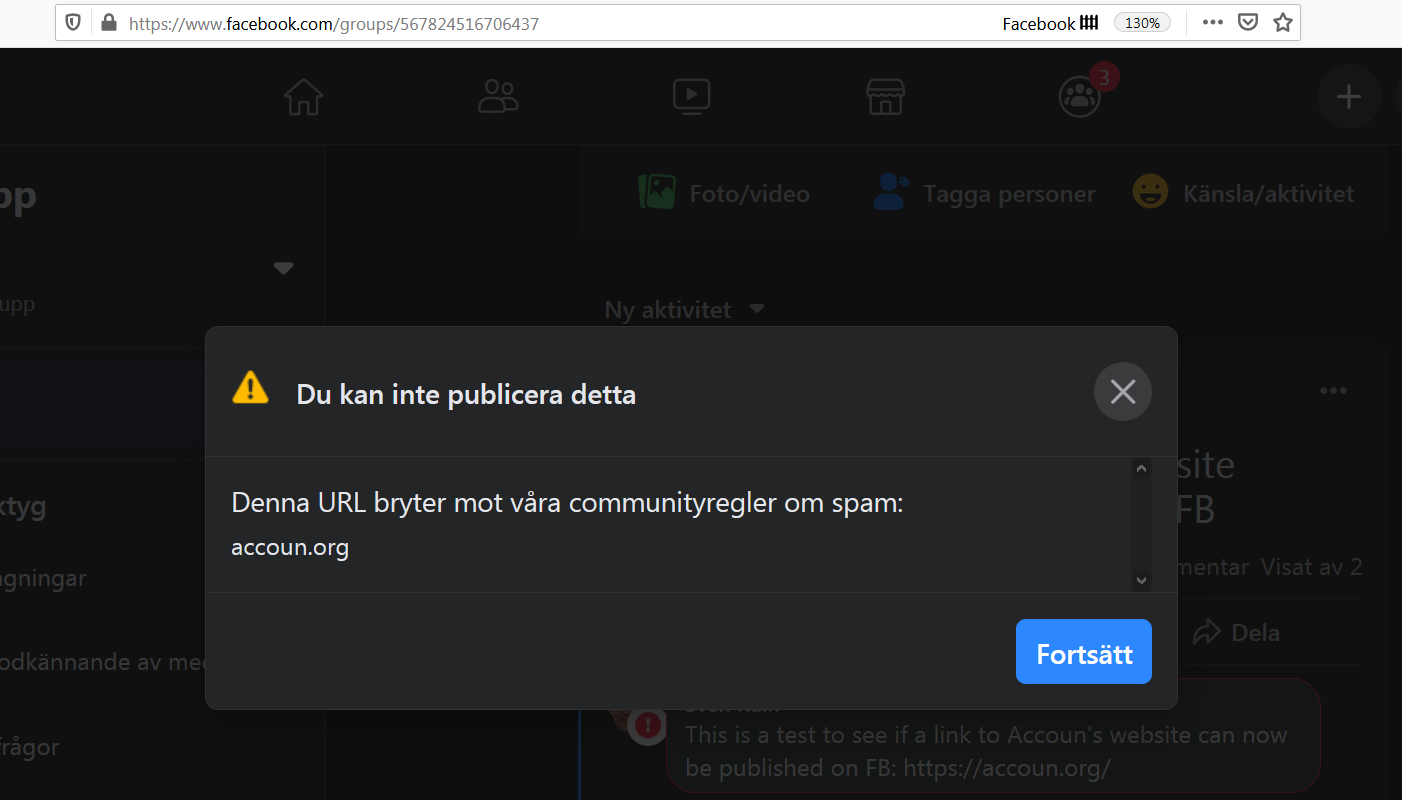 At Accoun, we have earlier brought news about censorship on Wikipedia to reader’s attention. Unfortunately we have more sad news about this – see part 1 and part 2 from The Grayzone. Among other things, The Grayzone reports that websites, which printed lies for example in the lead-up to the 2003 invasion of Iraq, are listed as reliable by Wikipedia. However, other websites with factual reporting that undermines these regime-change deceptions, are censored by Wikipedia.

Read the news from Amnesty International about the spying on Moroccan journalist Omar Radi.

It is terrible to see the photo from the My Lai massacre in Vietnam and the “Collateral Murder” video of civilians being gunned down in Iraq, but the comparison by Joe Lauria on Consortium News of the reaction to the evidence of two war crimes is important. At the end of the article he quotes Yanis Varoufakis, the former Greek finance minister, who says regardig the treatment of Julian Assange: “Things are getting worse. Far worse.”

Lately we also found out that the US prosecutors have failed to include the “Collateral Murder” video revelations in the indictment against Assange. It reminds us about Harold Pinter’s words about war crimes that “never happened”. Or at least, that is what they want you to believe.

Are you goind to let them get away with it?

If so, don’t be surprised if things are getting far worse.

Read the news about the International Criminal Court (ICC) on Common Dreams, NPR and in Swedish on UNA Sweden.

From Finland it is reported that behind the back of their parliament, a “cooperation deal” has been made with NATO, which could violate the Finnish constitution. The agreement also involves Sweden. This is one more crack in the illusion that the military in Finland and Sweden is under democratic control. It also reminds of Finland’s earlier mistake to team up with Hitler.