This review is written by former helicopter mechanic and rescue swimmer Sven Ruin (who served on Swedish rescue helicopters 1989-1990, but not in 1994 when Estonia sank):

Stefan Torssell has written an outstanding book. I already knew from before that it was very revealing. After reading the new edition from 2020, I can say it is also very complete and well-written. The new edition has a few extra chapters, which explain what has happened since the first edition was published in 2016. In September 2020, Henrik Evertsson’s documentary “Estonia – fyndet som ändrar allt” confirmed part of what Torssell and others have claimed for a long time: The official explanation of how Estonia sank cannot be true, because the documentary showed proof of a hole 4 metres high and 1.2 metres long on the starboard side. Instead, a more likely explanation is that Estonia collided with a submarine (some links in this post are to content in Swedish). Torssell even names a likely submarine. Perhaps the submarine was in these waters because of the smuggling of military equipment, which we know took place using the passengers on the ferry as a form of human shield.

To call the book “revealing” is actually an understatement. It is totally devastating for many in Sweden, because it exposes the cowardness and criminal behaviour in many parts of society. Torssell has investigated the disaster with the scrutiny, which authorities, most parlamentarians, many journalists and others have failed to do (or worse, many have tried to hide the truth and/or blame someone else). For me personally, it is very strange and sad to in Torssell’s book recognize some names of people I knew. This includes teachers at the Royal Institute of Technology (KTH) in Stockholm, where I took a ship-building course around 1994. Did they know that they were holding back the truth about Estonia, or were they so easily misled by others that they acted in good faith? I also recognize the name of a man heading the technical group of the Joint Accident Investigation Commission (JAIC). He worked at the same engineering company as I later did, so I have met him several times, although I worked with other projects. With his military background, I suspect that he was the military’s man in the investigation, with a stronger loyalty to the interests of the military than to the truth. 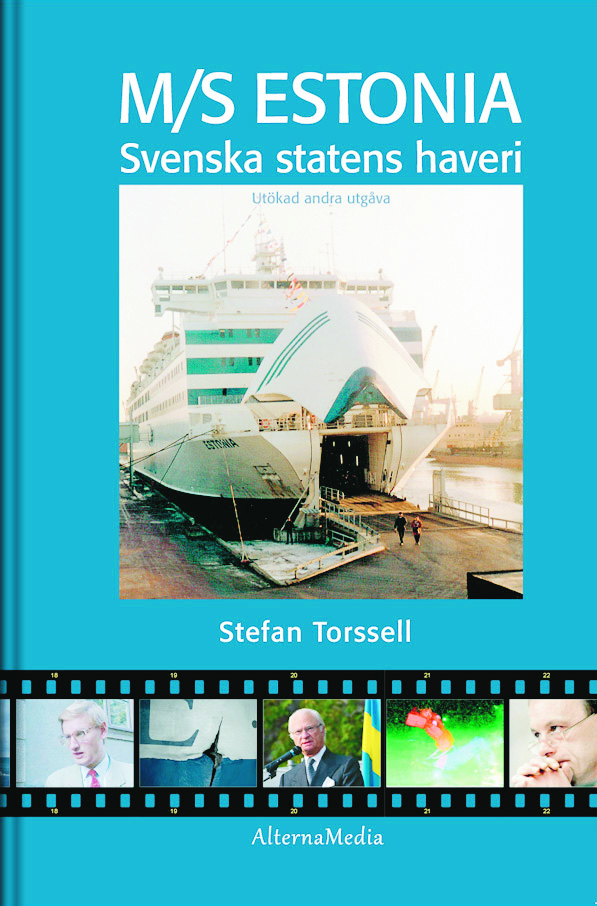 The sub-title of the book is “Svenska statens haveri”, which can be translated to “Swedish state’s failure”. This book is the story not only about a sinking ship, but even more about a sinking society. However, the issues exposed by Torssell concern not only Sweden. They are unfortunately far more wide-spread. For example, even the United Kingdom has signed the Estonia agreement from 1995, which among other things allows covering the wreck. To cover the wreck and thus perhaps crushing the bodies of the victims must be the opposite of what the agreement was said to do (to protect the wreck as a place for final rest for victims). The agreement between several states was obviously about covering up the truth, including that MI6 had been involved in the smuggling of military equipment on Estonia. Especially when Torssell’s book is now being translated to other languages, I wish there would be more in the book about the international dimensions, because perhaps not everyone understands how some secret government agencies operate together in networks across borders. A bit like international mafia. However, unlike the private mafia, these government agencies apparently have impunity.

What Torssell found and wrote about is so shocking and filthy, that the book has hardly been reviewed or mentioned by any major media outlet in Sweden. However, I strongly believe we all need to read this book, because if we don’t know what is broken in our society, we can probably not repair it.

Despite that Torssell’s book is so complete, it is of course not possible to include everything related to Estonia. One of the things he doesn’t explain much is the situation with the Swedish rescue helicopters around that time. Many people died because rescue helicopters arrived so late to the disaster site. There were many reasons for this. One could be that take-off was delayed for some helicopter. Where I did my military service, we were normally prepared to take off within 5 minutes from an alarm when the military was flying, but during evenings, nights and weekends when there could be civilian emergencies, we instead typically had “samvetsberedskap”. That meant we in the crew were not on duty, but the coordination centre could anyway try to contact the crew leader and ask us to fly. That way, it could take longer than 15 minutes (a number Torssell mentions) from an alarm to gather the crew and get reday to take off. Sometimes, it would not even be possible to fly because of this. During my active time as a rescue swimmer, I wrote a formal improvement proposal regarding this, but I think the Air Force just made it disappear. (But for another proposal regarding the medical equipment onboard, which I wrote together with a colleague, we actually received some money.) After my military service I got the opportunity to discuss the situation with two members of Swedish parliament, which resulted in Motion 1991/92:Fö202, but that did not lead to any improvement at the time, a couple of years before Estonia sank.  Also, I know that winch problems on Boeing Vertol 107 (Kawasaki) helicopters were known to the Air Force already in 1989, but they were apparently not corrected in 1994.

I could unfortunately not find any information in the book about the Swedish Military Intelligence and Security Service (MUST), which was most likely involved in the Estonia tragedy together with their international partners. MUST keeps a low public profile, but we should not underestimate the damage they are suspected to have done, which could also include other events (for example, I have personally met a military source who said that MUST was involved regarding the murder of Olof Palme, but that is a different story).

A disappointment with the book is found on one of the last pages, where Torssell writes (my translation):

What must remain state affairs and state secrets in relation to foreign powers, let these confidential secrets be preserved. That is why we have governments.

In those last sentences, it sounds like Torssell has after all these years given up, and accepted that governments and their authorities lie to their people to keep secrets. I certainly hope this is not the case, but that Torssell will continue his search for and reporting of truth. Because it is the heart of the matter, that these state affairs and state secrets were most likely the root cause that killed over 800 people that stormy night and prevented relatives and survivors to be treated with respect. And we have governments to serve the people, not to serve secret services. If we don’t reveal the dirty state secrets, I’m afraid our society will continue to sink, because truth and legal certainty are necessary for our society to improve.

The recent revelations, including an attempt to confiscate Evertsson’s material and to accuse  the film-makers in court (but not others who may have dived on Estonia), have confirmed another part of what Torssell has declared: That the special agreement/law regarding Estonia is actually there to stop the rule of law, not to protect the victims.

I think it is time for many more, including major media outlets in Sweden, to give Torssell credit for his work on Estonia.

3 thoughts on “New edition of the book M/S Estonia”